Today, a most wonderful adventure happened. I met a 10 year old genius, Mael,  and his parents. The father is Thierry van der Weid. His wife, (and mother of the genius ) is Martine (French).

Thierry is Swiss and a graduate of the French/Swiss business school: HEC. He came with his family to Costa Rica and developed many businesses very successfully. Martine is lovely, joyful and free. She plays with their son, and looks after their home.

Mael, at 4 or 5 years,  started painting. His parents detected talent and immediately encouraged him by building him a painting studio, getting him the best colors and papers, and painting with him to keep him company; to allow him to trusthis talent.

Now, years later, his paintings are so free, so amazing, that his parents (2 years ago) decided to open an Art Gallery where he paints and exhibits his paintings. He has already sold hundreds of them to people who are building homes around here and in the USA. His parents’ real estate offices bought some to decorate the new homes they were selling. 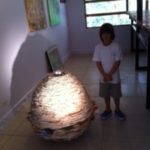 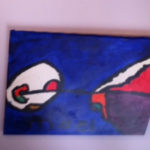 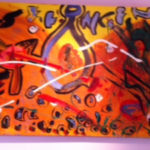 Mael, at 10, had already earned and saved $ 20.000 from his paintings. He went on a holiday with his parents and discovered mini-golf. He became passionate about mini golf. He decided to build one where he lives, right in his back yard, on some land his parents own around their restaurant : Cafe de Paris. Right on Center street at the cross roads to the beach and to Nosara –the village itself.

So Mael went to San Jose, the capital of Costa Rica,  and met with an engineer who specializes in designing and building mini – golfs. Then Mael designed his own game spaces  along with holes and obstacle courses. And the engineer came down to Nosara, Cafe de Paris, and built this Mini Golf attraction designed by Mael.

Mael had calculated the income that might eventually refund his expenses would double in 6 months. He made twice as much as he had foreseen. He noticed that in the afternoons, when the sun is too hot, parents came with their young kids. Because the mini golf is situated in a jungle like environment with many shady trees.

And in the evening ,  young adolescents came in groups of 5 or 7, hanging out, drinking coca cola, playing Mini Golf, laughing and having a great time. The entrance fee is between $5 and $10 depending on your age.

Meanwhile, Mael goes to the local Montesori School where his creativity is encouraged. And he continues to produce paintings, and now has begun sculpting. He is wise beyond his years and his mother says that whenever she is unsure about something and doesn’t know what to do, Mael comes up with a wise answer that helps her. Clearly, his parents are in love with their son and respect him deeply. During School holidays, they go travelling and visit different countries every year, so Mael gets to know the world. I had lunch with the three of them We asked Mael “are you happy ?” “yes” he answered. And : “is there anything you would change in your life ?”  “No” he answered, “it is perfect as it is, absolutely perfect .” 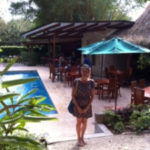 Can you imagine ????? And they all say : »this could only happen so gracefully because we are in Costa Rica »…. A Kudo for this country. HOW ABOUT THAT !!! Is that cool or what ???